You are here: Home VisitPlan a VisitFood & Drink Beers and Microbreweries

From the Black Boy in Winchester, famous for its kilt-wearing stuffed monkey, to the Snowdrop in Lewes, the South Downs is home to a great many unique pubs. Each one offers the chance to enjoy the different types of locally brewed beer. Though distinct in taste, these beers have one thing in common. They were all brewed at one of the 12 breweries using water filtered slowly through the chalk.

The multi award-winning Long Man Brewery in Litlington drills its borehole into this chalky landscape, and grows its barley in the topsoil. In Lewes, Harveys’ artesian well reaches 60ft below their brewery. On the other side of the National Park in Beauworth, Alresford, this same chalk runs under the 17th Century pub called the Milbury’s. Here you’ll find a rare human-powered water wheel above a 250 year old well. Peer in and you can still see the nails the well diggers hung their candles on.

Many of the pubs have tales to tell. The Royal Oak in Hooksway is said to be haunted by the ghost of a legendary sheep rustler called William ‘Shagger’ Shepherd. And King Charles II is supposed to have stopped to drink at the 12th Century George and Dragon in Houghton as he fled defeat at the battle of Worcester in 1651.

The names of many beers also tell parts of the South Downs’ story. Downlands Brewery brews a dark, fruity IPA called Whapple Way, after the Sussex dialect for bridlepath. Burning Sky has one called Devils Rest, named for ‘a small nook in the South Downs behind the brewery’. And Beachy Head brewery’s Legless Rambler unites all who have strode out on an afternoon walk after one too many.

Turn a beermat over in several of the National Park’s pubs and you may find a short walking route. It’s a National Trust scheme, with the walks each lasting around one to one and a half hours and circling back round to the pub where you started. The pubs involved are the Tiger Inn in Birling Gap, Shepherd & Dog in Fulking, George Inn in Slindon, Mill Tavern in Marley, Wheatsheaf Inn and Half Moon Inn in Midhurst.

The ultimate pub walk, however, follows in the footsteps of one of the South Downs’ favourite sons, Hillaire Belloc. In his famous Sussex novel The Four Men, the characters Poet, Sailor, Grizzlebeard and Author amble off on a walking tour from the George at Robertsbridge. They spend their time philosophising, marvelling at the views and enjoying ales in several inns along the way. It’s a celebration of the county he adored and the way he loved to adore it. As he writes in the preface: ‘Nothing is worthwhile on this unhappy earth except the fulfilment of a man’s desire.’ 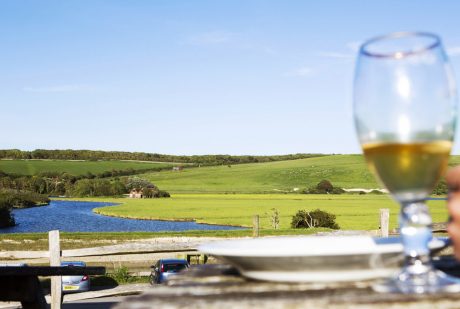 Beer in the South Downs