The South Downs remains the last bastion in the UK for the iconic Field Cricket, whose “cheep, cheep, cheep” is the quintessential sound of summer.

Now conservation groups have joined forces to save one of England’s most threatened species from extinction.

A task force, working under special licence, have been carefully capturing and then transferring small numbers of male and female pairs to new heathland sites, an extremely special habitat that is even rarer than the rainforest.

There are currently six colonies across heathland sites in Sussex, Surrey and Hampshire and it is hoped that the rehoming efforts will allow new colonies to thrive at other protected locations.

It’s a far cry from 30 years ago when the species was isolated to just one site of 100 field crickets in West Sussex. Despite a remarkable comeback largely thanks to volunteers – working in association with local landowners, the Natural England Species Recovery Project, London Zoo, the RSPB  and the Back from the Brink project – the Field Cricket remains one of the most threatened insects in the UK and setting up new colonies is vital for its long-term survival.

Two translocation days took place as volunteers and staff from partner organisations carried out “tickling”, a delicate exercise where the creatures are tempted to leave their burrows and can be carefully captured.

The project is being spearheaded by two National Lottery Heritage funded projects, Back from the Brink, lead by the RSPB and Heathlands Reunited who are working with the Sussex Wildlife Trust. 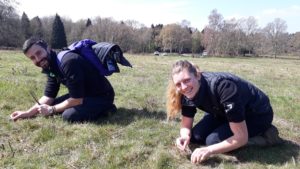 The rehoming exercise was successful and scientists will now be carefully monitoring the progress of new colonies.

Mike Edwards, an entomologist and director of Edwards Ecological and Data Services Ltd, explained: “The Field Cricket is a remarkable flightless insect that has really been in trouble for the last century due to changes in land use and forestry reducing its heathland habitat significantly.

“It’s a creature that is synonymous with the South Downs, having inspired the great 18th Century naturalist Gilbert White to write of the ‘field-crickets calling on the edges of the heaths of Surrey and Sussex’ in his diaries.

“This southern tip of England is really its only stronghold in the British Isles. The South Downs is right at the northern extremity of the range of the Field Cricket, which is more common in sunnier climes such as Spain.

“The species has been extremely vulnerable for many years, but our continued efforts over the past 25 of years are leading to a slow recovery.

“Ultimately, we want to make the Field Cricket populations more robust by extending and joining patches of habitat, as well as starting new populations by releasing crickets on restored heathland. We hope setting up these new colonies will further improve the chances of this fascinating little insect.”

Mike added: “Its distinctive shrill will always be the sound of summer and it would be a crying shame to ever lose it. As a native species to heathlands, increased populations will also have a knock-on effect of helping the entire eco-system and restoring these beautiful heaths to their former glory.”