Stop at Woolmer Forest and you’ll notice is that it isn’t really a forest at all. It’s a ‘wooded heath’. It was a former medieval hunting ground and the site of Iron Age and Roman discoveries of national significance. And now it’s the only place in the British Isles where you will still find all of 12 our native species of reptile and amphibian. 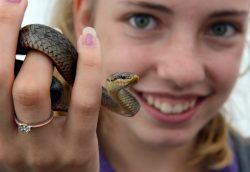 As well as the adders, sand lizards and great crested newts of Woolmer, many other rare species call these heathlands their home. In summer the sky is punctuated with the churring cry of the nightjar, which makes its annual migration here all the way from Southern Africa. At Iping and Stedham, the silver studded blue butterfly numbers are continuing to improve. And in the National Park’s wetter heaths and mires, you’ll find sphagnum moss and the carnivorous sundew plant, which can consume up to 3000 bothersome midges a year.

Because many of these remaining patches of heathland are isolated from one another, they have become less resilient. The 64-mile long Serpents Trail helps to reconnects them for people to enjoy, and heathland managers are working together to link fragmented heathland patches back together to benefit wildlife.

The Serpent’s Trail is part of the Sussex Wealden Greensand Heaths Project, whose volunteers work year round to restore and preserve the National Park’s heathland. They have reintroduced rare species such as the field cricket to Lord’s Piece and Chapel Common, cut back trees that shade out low plants and laid out marker posts along the trail for us all to follow. They are supported in their work by several local farmers, who, since 2005, have reinstated cattle grazing on several heathland sites to ensure they support a rich diversity of wildlife.

This benefits the sundew, for example, which best grows on the bare, muddy patches left by the cattle’s hooves. It’s been good for the rest of us too, as we can now follow in their footsteps and enjoy this rare habitat for many years to come.

The Heathlands Reunited project, led by the South Downs National Park Authority and funded by the Heritage Lottery Fund, aims to expand, create new and improve existing heathland to cover an area greater than 1,200 football pitches.

For more information about the project or for volunteering opportunities please click here.