Soil. The chances are most of us never stop to consider the ground underneath us.

Sure, we might all engage and interact with some of the flowers, trees and bugs are see climbing up out of the ground but, what is happening in the soil is just as important as what’s happening above it.

According to the UN, every five seconds the equivalent of one football pitch of soil is eroded. With the environmental crisis now firmly to the fore, we cannot overlook what is happening with our soil.

World Soil Day, falling on 5 December, is an opportunity for us to focus our attention on the importance of healthy soil but to also understand the broad diversity of soil types.

In the South Downs National Park there are perhaps up to 14 different types of soil! Below is a run down of just some of the soil types and what makes them so unique. 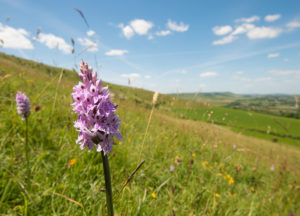 The majority of the South Downs is comprised of layers of soft chalk with seams and bands of flint.

For anyone who has walked any stretch of the South Downs Way, you might be surprised at how dry some of the path is, even in very rainy conditions. This is because the chalk is relatively thin and free-draining, with water passing through and filtering down through the layers of chalk to reach the groundwater.

Both the chalk and flint you get to see on the path are remains of animals and plants from the Cretaceous period over 100 million years ago.

This soil type, known as rendzina, is the reason why much of the South Downs looks as it does, as it only allows for slow rates of plant growth, this gives us a healthy abundance of small, low-growing wild flowers and herbs.

It’s said that in any one square meter of chalk grassland there may be up to 30-40 different species living within that ecosystem!

Birds such as corn bunting and linnet, butterflies like the Adonis Blue, the Silver Spotted Skipper, and wild orchids can be found on the chalk downland nature reserves Mount Caburn and Malling Downs. The ‘Pride of Sussex’ round headed rampion flower is also found here. 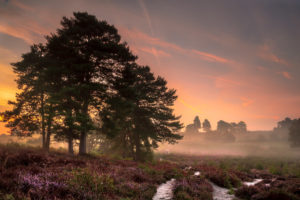 What makes lowland heath so different to chalk grassland? The soil!

While both are free draining, lowland heath sits on a bed of acidic sandy soil known as greensand. While still primarily the remains of animals and plants from the Cretaceous period, it is mostly sandstone, rather than chalk.

Generally, the soil is fairly sterile, making it unsuitable for arable farming. Because of this, landowners had no interest in farming or utilising this type of land. Instead, the land was given over to ordinary people who grazed their own livestock on the land.

Over time, this habitat would morph and change to become lowland heath.

Woolbeding Common is a lowland heath with wide horizons and intimate secluded places. On the common you may spot rare birds such as the nightjar and woodlark. Reptiles and insects like the long-horned beetle thrive in the heather and gorse.

Grazing by traditional hardy breeds like the Belted Galloway cows helps maintain diverse habitats – look out for Old Spot and Saddleback Pigs rooting in the bracken. 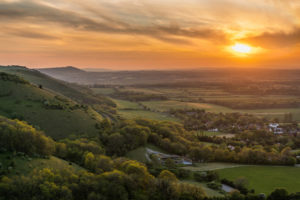 The other major soil type found in the National Park, but better known as clay.

While the National Park has been named after the long chalk ridgeline, the Weald forms a significant part of the National Park. The area known as the Low Weald consists of soft sandstone and clay soil types.

Although once dominated by woodland, over the years much of the Low Weald was cleared of its trees for use in shipbuilding, the production of coal and also for building in the expanding village settlements. However, the Weald still retains it’s woodland character.

The heavy clay make-up is also one of the reasons why there are many different words across Sussex and Kent to describe mud.

Ebernoe Common and Butcherlands nature reserve near Petworth is a classic low weald woodland, with grassy meadows in the clearings. Cared for by the Sussex Wildlife Trust, the reserve is rich in wildlife, from ferns and orchids, fungi and lichens to nightingales, woodcock, dormice and bats.