Stop anywhere in the South Downs and it is hard not to find an inspiring view.

There are stunning, panoramic views to the sea and across the weald as you travel the 100 mile length of the South Downs Way from Winchester to Eastbourne, culminating in the impressive chalk cliffs at Seven Sisters.

From near and far, the South Downs is an area of inspirational beauty that can lift the soul.

Here’s just some of what you can expect to see when you visit. 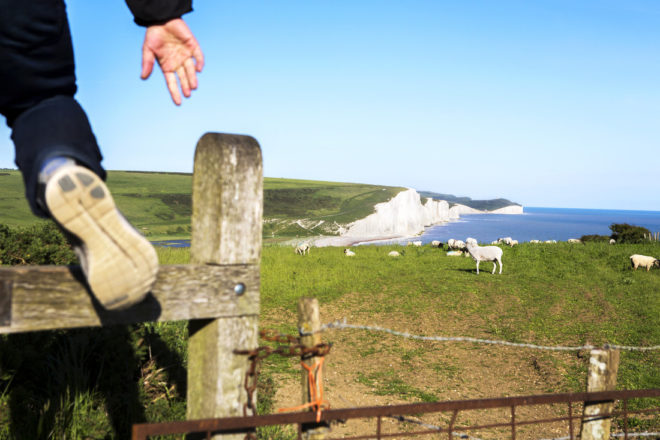 One of the iconic images of the South Downs National Park is the rippling wall of chalk stretching to the horizon at the Seven Sisters. These monolithic peaks and dips are the remnants of dry valleys, which are gradually being eroded by the sea.

A walk from Beachy Head takes in the hugely impressive chalk cliffs along to the iconic Seven Sisters and looks inland from the UK’s highest coastal point across the gentle, rolling chalk downs and valleys.

A few miles further west along the South Downs Way is Birling Gap, part of the Seven Sisters and one of the longest stretches of unspoilt coastline in the south.

Find out more about Seven Sisters

Located just north of Brighton, Devil’s Dyke offers some of the best views in the entire National Park.

At nearly one mile long, the Dyke valley is the longest, deepest and widest ‘dry valley’ in the UK. Legend has it that the Devil dug this chasm to drown the parishioners of the Weald. Scientists however, believe it was formed naturally just over 10,000 years ago in the last ice age. The ramparts or walls of the Iron Age hill fort can be seen when you walk around the hill and the remains of the curious Victorian funfair can be found just a few minutes from the car park.

Venture into the valley during spring or summer and you will discover a living carpet of flowers and a myriad of colourful insects including several orchids, wild thyme, horseshoe vetch and birdfoot trefoil. John Constable described the panorama from Devil’s Dyke as ‘the grandest view in the world’.

The area is now managed and cared for by the National Trust.

The highest point in the South Downs National Park, Blackdown Hill is a landscape of wavy hair grass, purple heather and pine trees that gives visitors a true sense of “wild”.

The views have inspired many and none so renowned as Tennyson himself: ‘You came and looked and loved the view, long known and loved by me, Green Sussex fading into blue with one grey glimpse of sea.’

As you amble down some of the ancient sunken lanes and drove ways, you can feel a sense of timelessness. Traders, shepherds and chert quarrymen have been using these tracks for thousands of years.

Autumn is a great time to visit with the changing colours and crimson sunsets. For the more adventurous why not walk some of the 64-mile long Serpent Trail taking in the rare lowland heath habitat?

There’s a magic about Kingley Vale that every previous visitor will attest to.

Perhaps it’s the twisted and primordial-looking trees that look straight from a Lord of the Rings movie?

The reserve contains one of the finest yew forests in western Europe, including a grove of ancient trees which are among the oldest living things in Britain.

Kingley Vale also has superb chalk grassland and is one of the most important archaeological sites in southern England, with 14 scheduled ancient monuments.

Look out for green woodpeckers hunting for ants on the grassland, as well as red kites and buzzards. There are also butterflies galore, including the beautiful chalkhill blue, holly blue and brimstone.

A view surely fit for a king!

This beautiful location is the highest observing point in Hampshire, with 360 degree views and, on a clear night, you can admire the Milky Way in all its glittering glory. Don’t forget the hot chocolate and camping chairs!

These unspoilt views of the cosmos are a virtue of the National Park’s status as an International Dark Skies Reserve.

The South Downs is one of only 13 such Reserves in the world and is one of the most accessible places to see the stars in all of Britain.

Situated just outside of Winchester in Hampshire, Cheesefoot Head is a natural amphitheater. A stunning viewpoint, it offers views out towards Butser Hill, the New Forest and the Isle of Wight.

The sloping walls of the amphitheater is comprised of chalk grassland and is home to dozens of species of wildflowers which attract pollinators of every sort – bees, butterflies and moths.  Bird life, including Corn Bunting, Yellowhammers and the South Downs songster, the Skylark, are often spotted.

It also lays claim to playing an important role in World War Two , where prior to D-Day, General Dwight D. Eisenhower addressed US troops who were often entertained by shows and activities hosted by the USO (United Services Organizations).