You are here: Home News Lest we forget – the compelling wartime story of the South Downs

Lest we forget – the compelling wartime story of the South Downs 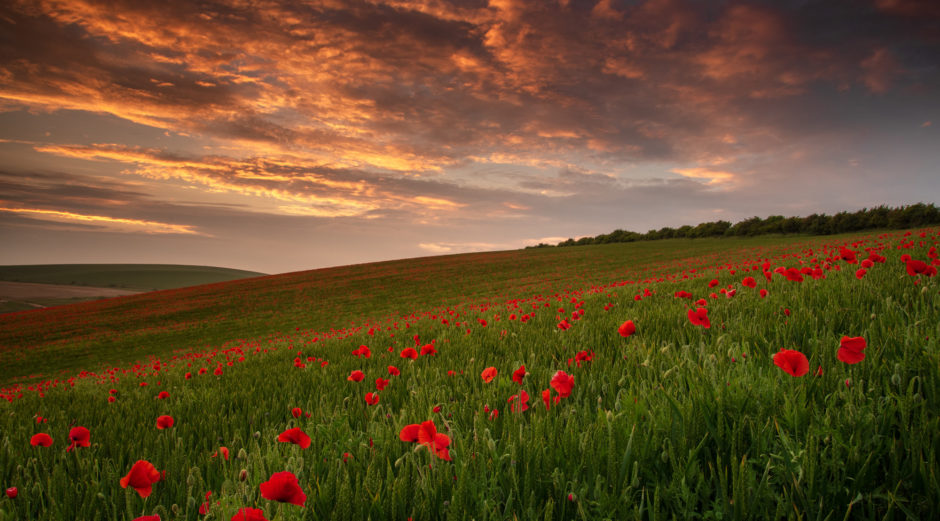 The iconic poppies of Flanders Fields are a testament to loss and recovery – a reminder that landscape recovers after unyielding onslaught, but also acts as a focus for remembrance and a reminder of loss.

Likewise, the landscape of the South Downs has witnessed the impact of World Wars, from historic buildings converted into hospitals for injured troops, to landscapes used to test munitions or train men for the Front.

And, as the nation comes together to commemorate 75 years since D-Day, the South Downs’ own footnote in the history of Operation Neptune must not be forgotten. 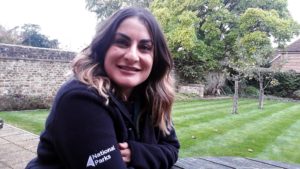 Here Anooshka Rawden, who leads on Cultural Heritage for the National Park, delves into some of the compelling history of wartime South Downs.

The South Downs played a key role in D-Day as a training area holding the thousands of men about to be sent to Europe. In May 1944, Field Marshal Montgomery, addressed the Royal Ulster 2nd Battalion Rifles, based at Grenville Hall, outside the village of Droxford in Hampshire. “Monty” stood on his jeep’s bonnet to talk to the troops who clustered around their hero. Droxford then hosted a secret meeting of the War Cabinet in June 1944 where Churchill and others met on the Royal train to agree to delay D-day by one day.

Known as ‘Lowther’s Lambs’, these men from the South Downs joined up together with friends and family, with Lowther also getting influential friends to support his recruitment drive.

The approach was one that mixed propaganda with a direct approach – with recruiters such as Neville Lytton driving house to house with a doctor to sign men up. Lytton volunteered to fight for the Royal Sussex Regiment and signed up men from his Estate to fight with him.  Many of these men never saw the South Downs again. The 12th and 13th Battalions, supported by the 11th, were part of a diversionary raid to divert German attention from the main Somme battle site to a location further south. In less than five hours, the 13th Battalion were all but wiped out, and 30 June 1916 became known as “The Day Sussex Died”.

A poignant new collaboration of music and animation was released last year  to mark the 100th anniversary of the end of the First World War. Composer Damian Montagu was inspired to write his new piece ‘The Boar’s Head’ after hearing the story of ‘the Day that Sussex died.’ Watch and listen here. 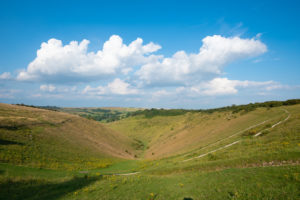 The funfair and cable cars of the Victorian age were dismantled at Devil’s Dyke and the site became a munitions research ground during the First World War.

The deep chasm of the valley was used to suspend bombs for controlled drops to ensure activation prior to impact. Luckily, work to prepare the site for testing wasn’t completed until shortly before the end of the war in 1918, so it was saved from the worst of the plans to use it as a testing site.

In the early 1940s, the site was again commandeered by the government for military training. The Canadian Army took over the Devil’s Dyke hotel, and used the site to undertake training in preparation for the D-Day landings.

As a writer from the period says: “Barbed wire entanglements replaced fences, roads were closed and Howitzer guns were parked in lay-bys to keep locals as well as the enemy out.”

A meeting of east and west

When Sikh or Hindu soldiers died at one of the Brighton hospitals, their bodies were taken for cremation at a spot on Holt Hill, where funeral prayers were said and the ashes of the fallen scattered into the sea to complete the ceremonies. 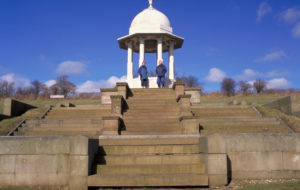 Today the Chattri Memorial situated above Patcham within the South Downs setting is a meeting of east and west, and a testimony to “those Hindu warriors born in remote villages, for whom the wildest imagination would never have suggested at their birth that their funeral fires would be fanned by the winds that swept those Sussex hills…” (Brighton Herald, 29 Jan 1921)

A hub for horses

Horse owners were ordered to send their animals for assessment to support the war effort. In Petersfield, the local police station was where veterinary checks took place to decide which horses were suitable for service. As well as losing horses, local farmers and tradesmen also had everything from carts to harnesses requisitioned for the war effort. It is estimated that 8 million horses, mules and donkeys died in the First World War.

The Canadian Forestry Corps delivered over 70 forestry operations in Britain to ensure essential tasks, such as forestry clearance for airfields and the production of lumber supported the war on the Front. They supplied over 70 per cent of Allied lumber used during the First World War, and here in the South Downs, operated at a base on the Slindon Estate in West Sussex. They were aided by around 300 German prisoners, based at a Prisoner of War camp on the Estate, who also worked as labour on local farms. Trees were felled for pit props and building to ensure the lines of trenches could be built, maintained and repaired.

Little of the camp or logging camp at Slindon Woods remains visible today, but the National Park’s Secrets of the High Woods Project in 2017 explored the site to record those traces that do remain visible.

“They rest in a friendly land”

Thousands of wounded soldiers and refugees temporarily settled in Hampshire from Belgium after the German invasion, with an estimated 16,000 refugees making the journey across the channel in a single day.

A number of Belgian soldiers found their way to the South Downs from the battlefield. The last resting place of people far from home after hospitalisation or temporary accommodation in the Downs is attested by a memorial in Southampton Cemetery, unveiled in May 1916 where “this monument… in honour of officers and men of the Belgian Army, is a touching symbol of solidarity. These simple and obscure heroes, wounded in Belgium on the field of battle, received their last cares in England, where they passed their final and supreme moments. They rest in a friendly land.”