For those visitors who make it to the top of Bow Hill at Kingley Vale Nature Reserve, it is hard not to be awestruck by the sight of the four bronze age tumuli running along the plateau.

These mounds, also known as The Devil’s Humps (or the Kings’ Graves) are some of the most impressive round barrows surviving on the South Downs. Numerous myths  surround them, the best being the final resting place for Viking leaders defeated by the men of Chichester.

For centuries the grassland around the burial mounds was kept short and open by sheep and other grazing animals. However as grazing ceased after the war, scrub started to creep in, notably around the two north-eastern tumuli (bowl barrows) which until recently had become partially obscured by gorse. On the back of the Secrets of the High Woods project we are now making renewed efforts to clear this scrub and try and restore the mounds to their former glory. 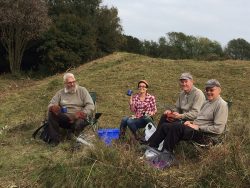 Scrub clearance is a slow and thorny task! For this reason we enlisted the help of the South Downs VRS, who have spent many a day hacking through gorse and hawthorn. We’ve also had help from the SDNPA rangers and the Phoenix Futures ‘Recovery Through Nature’ volunteers.

The work will continue throughout the winter season as we continue to clear scrub to the south and thereby restore some of the mounds’ original views out toward  Chichester. We will also be re-instating the old grazing regime which will not only  keep the scrub at bay but also help to encourage the chalk grassland that once  covered this area.