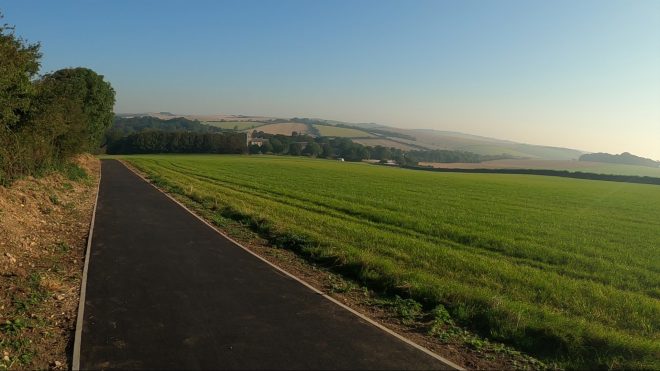 A popular pathway giving access to the heart of the National Park has undergone a major facelift.

A partnership between Brighton & Hove City Council, East Sussex County Council and the South Downs National Park Authority has seen more than £300,000 spent on the Falmer Road path, which links Falmer and Woodingdean, near Brighton.

The new smoother and wider surface means it’s now accessible for anyone using wheelchairs or mobility scooters, as well as for people walking, cycling, wheeling, scooting and horse riding.

On the doorstep of the National Park, the 2.5km path has been a popular route for walkers, cyclists and commuters since it was installed alongside Falmer Road in 2013 with the help of funding from the Department for Transport.

The path, which is to be dedicated as a bridleway, will be jointly maintained by Brighton & Hove City Council and East Sussex County Council.

Councillor Martin Osborne, a Member of the National Park Authority and representing Brighton & Hove City Council, said: “The path looks fantastic and I’d like to thank everyone who has worked so hard on the project.

“It’s a great traffic-free link between Woodingdean and Falmer and I know will be well used by people getting to and from the University of Sussex, work or just people out for a walk or bike ride.”

Alister Linton-Crook, who leads cycling in the National Park, said: “The new surface is the best solution for this well-used route, making it easier for people to get into the South Downs from Brighton or from Falmer station.

“We know people will enjoy using this route, soaking up the views and connecting with the amazing landscape and biodiversity of the National Park.”