This year is very special for the South Downs National Park.

It was 10 years ago that a vision became a reality.

After years of passionate campaigning, England’s newest National Park was born, designating 1600km2 of special landscape with its breathtaking views, unique heritage and hidden gems for the benefit of the nation.

A rich variety of wildlife and habitats including rare and internationally important species.

Distinctive towns and villages, and communities with real pride in their area.

An environment shaped by centuries of farming, embracing new enterprise and providing vital services such as clean water, food and space to breathe.

A Dark Night Sky with the best view of the stars you’ll find anywhere in south-east England.

We have an action-packed line-up of events, launches and activities to mark the anniversary, beginning with the Dark Skies Festival next month and followed by Discover National Parks fortnight for the Easter holidays. All details will be posted on our website and in the newsletter.

We want everyone who loves the National Park to be part of the celebrations, so why not come to one of our events or host one of your own?

But as we begin our celebrations, we look back at the campaigners who strove to give the South Downs the recognition and protection it deserved since being identified as one of 12 potential National Parks all the way back in 1947.

Robin Crane, Chairman of the South Downs Campaign, reflects on the inauspicious beginnings of the campaign, the struggles that followed and the eventual success.

In December 1989 a review of our National Parks was launched under the chairmanship of Professor Ron Edwards.

This led to seven of us meeting at Woods Mill on 15th May 1990 to decide how the designation of the South Downs as a National Park could best be promoted. From this humble beginning the South Downs Campaign grew until by 2010 our membership comprised 160 national, regional and local organisations, including 28 town and parish councils.

From the very beginning we were faced with one obstacle after another.

In 1990 the South Downs Forum was supposed to debate the future status of the Downs, but a fait accompli was delivered by the Countryside Commission when they established the Sussex Downs Conservation Board.

In 1997 the Commission launched its consultation on the future of all the AONBs and their 1998 publication “Protecting our countryside – Advice to Government” stated that the South Downs did not meet the criteria for designation as a National Park.

Not one of their Commissioners who approved this document had first-hand knowledge of our two glorious AONBs. 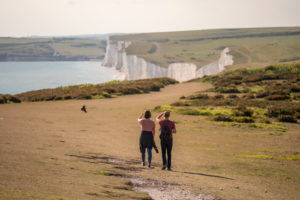 There was obstruction in Whitehall as well. When we met the Environment Minister, Michael Meacher in March 1999 we found that our three letters and two powerful documents rebutting the Countryside Commission’s Advice had not been shown to him. Nor had he been made aware of the huge level of public support for a South Downs National Park. Michael Meacher turned to his assistant and said “How am I meant to undertake a thorough analysis of this case without the evidence?”

Fortunately we won the argument. The then Deputy Prime Minister, John Prescott, announced that he was asking the newly-formed Countryside Agency “to consider designating, in consultation with local authorities, a National Park for the South Downs.” The fact that Prescott then said that this was “a hundredth birthday present from Labour to the nation” inevitably raised the political temperature to boiling point for the remaining years of our campaign.

The first South Downs paper to be put before the Countryside Agency’s new Board was so flawed that a hastily written response by CNP was shoved under the Agency chairman’s door at 11.30pm on the night before his meeting.

However, the Agency’s Board took the trouble to visit our two AONBs before their second meeting. The next day they unanimously decided that the South Downs did meet the criteria for designation as a National Park and that the process of designation should proceed. The Countryside Agency then took two years to consult the public and the local authorities on the South Downs National Park. We were closely involved in their reviews on Administration and Planning. Meanwhile, our boundary group undertook nearly 90 visits and surveys of areas outside our two AONBs, to gather evidence for their inclusion in the National Park.

During the 13 months of the protracted Public Inquiry we were in constant attendance. We made 26 formal appearances, tabled 25 written representations and submitted 52 proofs of evidence.

Throughout our history we were extremely fortunate, not only in having so many supporting organisations, but in having a succession of exceptionally able and dedicated members in our team. The quality of all our work was of the highest standard and so the evidence presented by the Campaign was always very hard to refute. Had it not been so there would be no South Downs National Park today.

It was very fortunate that the Countryside Agency’s consultants initially proposed to exclude Liss from the National Park because this enraged a certain local resident: Margaret Paren. She promptly joined our campaign in 2002 and became a leading member of our team. We were of course delighted when she became Chair of the South Downs National Park Authority.