You are here: Home News The South Downs is just as much a wilderness as Yellowstone

The South Downs is just as much a wilderness as Yellowstone 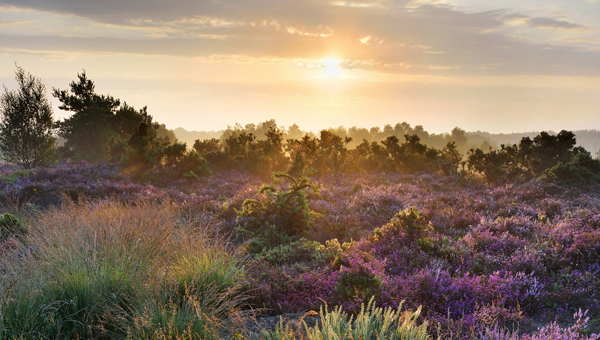 From Charles Winchester, ranger for the Wealden Heath area

This might sound like a crazy talk, but there really is a lot of sense in this claim.

Granted, as landscapes go the South Downs is undoubtedly pretty domesticated and agrarian (currently there are precisely zero large predators here), and there’s no doubt that Yellowstone is one of the more rugged and remote protected areas in the world (in 2018 the Park’s predator population was estimated to include 104 wolves and 718 brown bears). But when it comes to wilderness, all is not as it seems…

At first glance wilderness looks like a pretty straightforward term: it’s the word we use to refer to a place that’s totally natural, a place without human interference and certainly without any human settlement. Lots of places might be referred to as ‘wild’– even heathlands, some of our most thoroughly cultural landscapes, are often described in this way – but to be a true wilderness a place needs to be much more unmanaged, much more remote.

The increasing popularity of rewilding amongst conservationists taps into this self-evident idea of wilderness. Rewilding Britain’s own website states that “Rewilding is the large-scale restoration of ecosystems where nature can take care of itself”. In true wildernesses humans aren’t required. Except maybe to view it from afar, or perhaps take the odd picture. But regular management interventions? Or conservation volunteer work parties? Forget it.

But, as is often the case, our intuitions can mislead us. And this is certainly true when it comes to our understanding of wilderness. Its history and meaning is actually much more interesting than it first appears.

In a nutshell we can blame the Romantics for the way we think about wilderness today. Starting in the late 18th Century poets, philosophers and artists – many of whom, like Wordsworth and Thoreau, are now household names – redefined how people thought and felt about wild areas. Before them, wildernesses were at best wastelands (the word’s nearest synonym) and at worst terrifying places to be avoided at all costs. After them, however, wildernesses were rebranded as some of the most incredible landscapes in the world. In the language of the time, wilderness had gone from being nothing more than a barren and uninhabited desert to becoming something truly sublime.

Even our old friend, John Muir, helped with this reimagining of wilderness, describing the Sierra Nevada as more like a beautiful cathedral than a terrifying wasteland. And, in arguing against those who sought to dam his beloved Hetch Hetchy Valley (neighbouring the now famous Yosemite), he pushed for an alternative site in the gentler foothills – a preference that had nothing to do with the relative wildlife value of the two areas, and everything with the prevailing cultural traditions of wilderness and the sublime. In the minds of Mr Muir and his contemporaries, upland landscapes always trumped the less dramatic – and less ‘wild’ – lowland landscapes. Areas perceived to be wildernesses had gone from being reviled to being places that needed our protection. And many people (Muir included) began campaigning for them to be set aside before they were destroyed by human interference.

And so it was that National Parks, like Yellowstone in 1872, were created. Held aloft as examples of pristine nature, these landscapes were considered to be totally uncontaminated by civilisation. The only problem with all this is that they weren’t.

So called ‘wild’ places like Yellowstone have always been used by people. The US National Park Service itself highlights archaeological evidence for the human settlement and use of Yellowstone since the ice sheets retreated 11,000 years ago: “the Crow occupied the area generally east of the park, and the Blackfeet occupied the area to the north. The Shoshone, Bannock, and other tribes of the plateaus to the west traversed the park annually to hunt”. Although this usage of the Yellowstone has been temporarily suspended by the creation of the Park, the Shoshone are currently in discussion with the Department of the Interior to reinstate their peoples’ right to hunt and harvest resources from within its boundary. Similarly, thoroughly human histories are now being uncovered in other areas often described as ‘pristine wilderness’, like the Amazon and Congo rainforests.

And if people have been using, managing and modifying wild places since the last ice age, then maybe the absence of human beings isn’t such a good yardstick for wilderness after all. (Even the most hardcore re-wilder would struggle to justify recreating ecosystems that haven’t existed since before the last ice age – not to mention the fact that our climate’s subsequently undergone so much change that such an objective would be completely unobtainable anyway).

So it’s pretty clear that our understanding of wilderness – handed down to us by those pesky Romantics – is as much a cultural creation as it is common sense. As American historian William Cronon puts it: “The more one knows of its peculiar history, the more one realizes that wilderness is not quite what it seems. Far from being the one place on earth that stands apart from humanity, it is quite profoundly a human creation—indeed, the creation of very particular human cultures at very particular moments in human history” (you can read his excellent essay on wilderness in its entirety here).

Pretty radical stuff, right? After just a bit of digging even Yellowstone – in many ways the archetypal wilderness – turns out to be an entirely human creation. In order to manufacture this myth thousands of years of human settlement and management had to be ignored, Native American people had to be evicted, and large predators had to be reintroduced. (After being hunted to extinction in the 1920s, grey wolves from Canada were released in the Park in January 1995 to help control rapidly growing elk numbers. But this obscures the fact that Yellowstone never lost its true apex predator: people.) To borrow a phrase from The Donald, Yellowstone’s wilderness myth really is a first rate example of ‘fake news’.

So if our present day understanding of wilderness is a cultural creation and people are – and always have been – a critical part of the places we like to call ‘wilderness’, where does that leave us?

Well, for one thing Yellowstone’s starting to look a whole lot less wild compared to the South Downs than it first seemed. But it also suggests the term ‘wilderness’ should be used with care: “The most troubling cultural baggage that accompanies the celebration of wilderness has less to do with remote rain forests and peoples than with the ways we think about ourselves… Idealizing a distant wilderness too often means not idealizing the environment in which we actually live, the landscape that for better or worse we call home.”

Perhaps that’s the lesson here: that the cultural landscapes in which we all live have just as much of a role to play in 21st Century conservation as the more remote, glamourous and seemingly wild places we all aspire to protect. Rather than being seduced by superficially pristine rainforests, or the wild grandeur of the American West, maybe we should take the time to recognise the elements wilderness in landscapes all around us – including our beautifully managed chalk grasslands, and our thoroughly cultural, but no less magnificent, heathlands. After all, wilderness really is in the eye of the beholder.

The Romantics might not agree, but I’m willing to stick my neck on the line and say that there is just as much wilderness (in the fullest sense of the word – wildlife, cultural history, sublime vistas and all) to be found in the South Downs as in Yellowstone. And by acknowledging its very human past – and the important role people will inevitably play in its future – maybe there’s even more so.