Children aged 7 to 11 from local schools in the Meon Valley got hands-on conservation experience on 8 & 9 June when they helped release water voles into the River Meon.

Pupils from West Meon C of E Primary School, Inwoods Small School and Droxford Junior School learned about the South Downs National Park’s work to re-introduce water voles on to the river, where they had been locally extinct, in special assemblies led by National Park rangers. 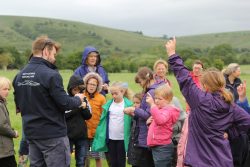 A total of 90 children then visited the river at East Meon where they helped to feed the water voles in their release pens. Some were even lucky enough to see the first voles venturing out onto the riverbank to explore their new homes.

The National Park is now in the fifth and final year of its project to return the water voles to the Meon Valley. South Downs rangers have been working with landowners to control the mink population – responsible for the water voles local extinction – and improve the habitat.

As part of their visit the children got to learn about the release process. Water voles are moved into release pens where they get used to their new surroundings and gradually release themselves into the wild. They also learned how to identify different footprints left by mammals that have explored the monitoring rafts on the river over the course of the project.