A breathtaking composition capturing a runner jogging into the mist-covered hills at sunrise is the winner of the South Downs National Park’s Annual Photo Competition.

“Into The Mistic”, by Andrew Gambling, took first place in the popular photography contest, which attracted more than 170 entries capturing scenes from across the length and breadth of the National Park.

The theme for the competition was “Experiencing the Natural World” and judges agreed that Andrew’s extraordinary photograph met the brief perfectly. 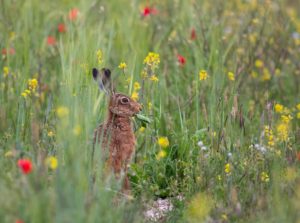 Meanwhile, the competition also included a separate category for best wildlife image – with first place going to an adorable picture of a hare munching on leaves in a colourful blanket of wildflowers.

Finn Hopson said: “This image is the embodiment of experiencing the natural world – to imagine yourself as a runner in that environment is astonishing. It would have been fantastic to be there at that moment.”

Nick Heasman added: “It’s a natural experience, but the amazing thing about the photograph is the almost supernatural feel to it. When you consider it’s so close to a busy urban area and yet it feels otherworldly. It offers a bit of escapism and I think that’s what the South Downs National Park is all about.”

Andrew Gambling, from Storrington, West Sussex, took the shot near Amberley Mount, capturing a misty scene in front of Houghton Hill. He said that the “sun had risen but was diffused by the mist, creating a ‘jaw’ around the sun for a few seconds, displaying the different levels of mist in the valley, just as a runner ran down the South Downs Way to disappear into it”.

Andrew, who wins a £250 prize, said: “I am incredibly honoured, and slightly humbled to have won. I find there is nothing better, on so many levels, to be out in the South Downs National Park as it wakes from its slumber on a misty morning with the camera on a tripod, and a freshly boiled cuppa in hand, trying to capture the essence of this very special place. I hope this picture, and many others that I look forward to sharing in the future, make people feel the same.”

The runner-up prize for the main category went to Mark Couper, who captured an exceptional image of the National Park’s heathland at Stedham Common, in West Sussex. 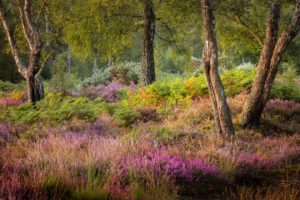 Commenting on “Stedham Common Sunrise”, Rachael Talibart said: “It’s absolutely stunning and I would have that on my wall. It’s a very accomplished composition.”

Nick added: “It’s an amazing representation of the diversity and layers of the ecology of heathlands. It reminds people that the fringes, the transitions and those bits between the trees are where you will find the wildlife. The colours are also breathtaking.”

Mark, who lives in Cosham, Portsmouth, and wins £100, said: “The South Downs National Park is such a large, beautiful and diverse place and there are so many stunning photos being taken each year by people living within the area or visiting it. To have captured something that the judges have enjoyed, and shows off the area, really feels quite special!” 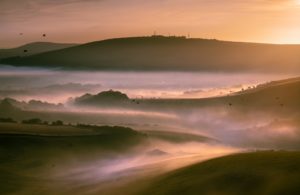 Third place was awarded to “Take Flight”, a beautiful misty scene taken at first light at Steyning Bowl. Lloyd Lane, from Brighton, wins £50 for his composition.

Finn said: “It shows off the layers of the South Downs and to have those little human elements among those lovely curves make it a wonderful photograph.”

In the wildlife category, the winner was “Hare in Wildflower Margin”, taken by Adam Huttly, from Littlehampton. The picture was taken just north of Arundel.

Commenting on the image, Rachael Talibart said: “I like that you can see chalk in the photograph so you know it’s the South Downs. But my favourite element is the hare’s little mouth full of food – it’s adorable! The lighting is also lovely. A very classy photograph.”

Adam, who wins £100, said: “I really hope this image encourages people to get out and discover the wonders of nature that can be found on the magical South Downs and surrounding areas.

“It also highlights the great work the farmers do by leaving margins and wildflower borders. So many people work very hard to protect our green space and the precious wildlife that need this space to survive and flourish.” 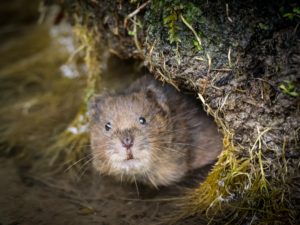 Runner-up in the wildlife category was Dick Hawkes with his delightful picture of a “Surprised Water Vole”. Judges commended the patience of the photographer in capturing an “amazing wildlife shot” as a water vole appears from a burrow on the River Meon in the middle of East Meon, Hampshire.

Dick, who wins £50, said: “I am very pleased to have been awarded the runner-up prize, which is the icing on the cake after the shot took several 130-mile round trips from my home in Kew following up reports of likely habitats for water voles and then being able to get so close to this very shy animal. I’m not sure who was the most surprised when I peered over a low wall into the narrow channel!”

Paying tribute to Steve Watkins, SDNPA Member Doug Jones said: “We’ve worked with Steve since the early years of the competition and he’s always been a tremendous asset to the judging panel. Although his work had taken him all over the world, the landscapes of the South Downs seemed to hold a particular passion for him and his ability to inspire others to enjoy the outdoors will be greatly missed.”

The five winning images will now join five highly-commended photos for the People’s Choice vote, which has a £100 prize. Those highly commended are: “Pony Heaven” by Joe James; “The Mindful Walker” by Gary Hider; “The Theory of Everything” by Ismail Mungul; “Female Chalkhill Blue Heading To Roost” by Thomas Moore; and “Startled Skylark” by Sara Humphrey.

Vote for your favourite by January 31 at www.southdowns.gov.uk/PeoplesChoice2020