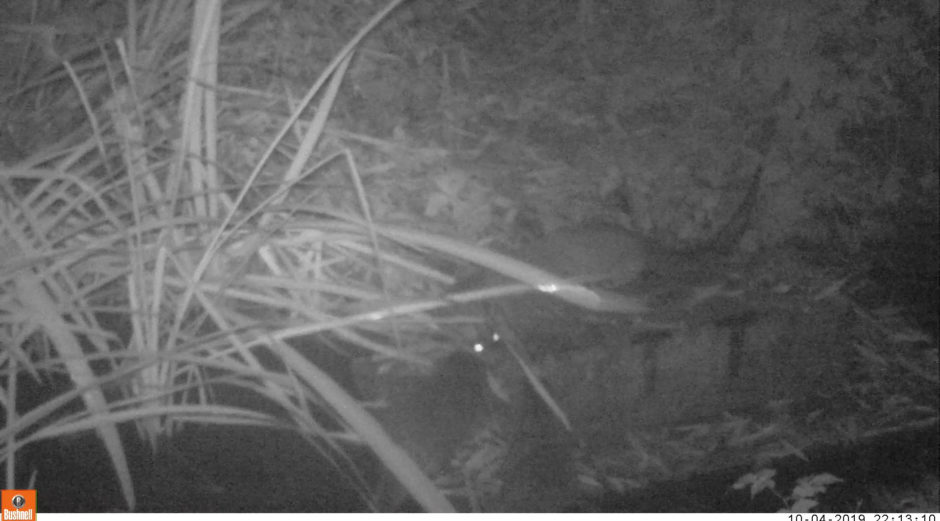 Adorable footage of a mother otter and her two cubs provides the first definitive proof that the iconic creatures are breeding on the River Meon.

Thought to be locally extinct in Hampshire until a few years ago, the incredible video is further evidence of reductions in river pollution that is allowing the secretive mammals to thrive.

The otter family was captured under the cover of darkness by a wildlife camera installed by the South Downs National Park Authority.

The mother, with gleaming bright eyes, is seen climbing on to a raft – a device used to monitor river-dwelling species. Her two curious cubs are then seen following in her tracks before the trio glide back into the water.

Monitoring the wildlife camera was Dave Strutt, who is a Volunteer Ranger for the South Downs National Park.

Dave, who lives in Horndean, said: “We have a few of these wildlife cameras dotted around the Meon Valley and we sometimes see foxes, badgers, deer and hare.

“To see an otter is incredibly rare – let alone a mum and her two cubs. After watching hours and hours of waving leaves and reeds, it was a delightful moment to see this otter family appear on the screen. It’s a rare treat for any nature lover!”

After tottering on the brink of local extinction, otter populations have bounced back due to less river pollution – which was a historic issue caused by factors such as intensive agriculture. The Meon Valley Partnership, which includes the SDNPA and other partners, has also worked with landowners to help restore river banks and generally improve the health of the river.

Elaina Whittaker-Slark, who works from the SDNPA’s base near Hambledon, and is Lead Ranger for the Western Downs, said: “The otter was once very widespread across Britain and was as much a part of the native fauna as badgers and hares. The footage of a mother and her two cubs underlines the tremendous work that has been done over the past decade by landowners and the Partnership to improve the health of the River Meon.”

And Elaina added: “Although a short clip, this video provides a fascinating insight into otter behaviour. We can see the mother checking her territory and the cubs following her. There’s a very close bond between the cubs and the mother, who raises them without the male.

“We would normally see adult otters ‘spraint’ the raft if they go on it – basically it’s a form of faecal scenting. In this case, the female doesn’t spraint. This is because she doesn’t want to attract attention – and potential competition – from other otters, particularly males who might threaten the cubs.”

It’s believed there are now three breeding females of the otters on the River Meon.

The SDNPA and its partners have interacted with 56 landowners along the River Meon to help improve the health of the river. This includes good river bank management to support eels, which are a vital part of the ecosystem and are the favoured food of otters.