Nina’s childhood adventures inspire a passion for our wonderful woodlands

The gnarled trees are among the oldest living things in Europe – beginning their lives some 2,000 years ago at a time when Roman legionaries were first landing on England’s southern shores.

Countless generations since then have looked in awe and wonder at the yew forest of the South Downs at Kingley Vale – a fittingly regal name for such an enchanting place.

One of those children captivated by the woods was Nina Williams.

Fast forward 30 years and those childhood adventures have inspired a life-long passion for caring for our woodlands.

Nina’s story is featured in a beautiful short film that celebrates the woodlands of the South Downs National Park and reveals the important role foresters play as custodians of this delicately-balanced ecosystem.

To give it some context, the South Downs has more woodland than any other National Park in England or Wales – with 23 per cent of the National Park being covered by this habitat. So the careful management of these vast treescapes is vital for both people and nature.

Nina, who is Head Forester of the Cowdray Estate in West Sussex, says: “I was very lucky to grow up near the woods at Kingley Vale and coming back to this landscape really does feel like coming home. It’s so lovely and just a great place to play when I was a child.

“At the top of the hill are these yew forests that are dark and foreboding and feel truly ancient. It was really quite thrilling as a kid and it inspired me to do what I do now.

“A woodlands character changes throughout the seasons and it’s one of the most fascinating qualities of any woodland. You really get a sense of that slow heartbeat that is part of forestry and a woodland. It perseveres and is to be respected.” 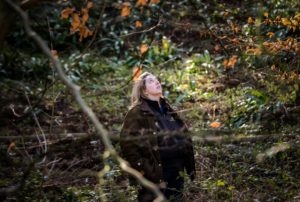 A key aspect of Nina’s role is the “trifecta” of forestry – commerce, biodiversity and recreation.

Nina explains that the woodland landscape requires active management in order to be healthy and meet those three purposes.

She explains:  “When we manage woodlands we’re thinking about productive aspects of harvesting the trees for timber and various woodland products. Then there’s also the very important biodiversity and habitat management. The third element is looking at the recreational and societal benefits as well. All three are equally important and need to be managed in a balance.

“One of the challenges I face in forestry is that perception of ‘Why are you cutting down trees?’

“At Cowdray we plant at least 50,000 trees each and every year and that’s a process of restocking every single area that we have felled trees in. The work I do is about managing these wonderful vistas, views and forests and making sure they are just as healthy, productive and biodiverse for the next person who has to look after them.”

The South Downs National Park Authority is working with foresters like Nina to increase the resilience of the National Park’s natural resources, habitats and species so they adapt to climate change and other environmental pressures.

Nina’s video is the second instalment of “Your National Park”, a series of short films about the South Downs to mark the National Park’s 10th anniversary. The clips feature dedicated local heroes of the National Park, including foresters, farmers, historians and local people, who collectively are helping to care for this special place and ensure it will be there for future generations to enjoy. Each hero represents one of the outcomes of the Partnership Management Plan – which reveals 10 key objectives for the future of the National Park.