Major campaign is launched to save our bees and pollinators

Major campaign is launched to save our bees and pollinators

A campaign launches today to help reverse the decline of bees in the South East and create a haven for pollinators in the South Downs National Park.

The South Downs National Park Trust, the official charity for the National Park, is bidding to raise £75,000 to help restore flower-rich habitats that will protect bees and other important pollinators and allow them to thrive.

The campaign, called Bee Lines, will work with farmers and other landowners to create new wildflower corridors – essentially a “road system” for insects – that will link habitats and encourage pollination.

Through its fundraising, the Trust hopes to create new wildflower corridors across the National Park.

As part of the campaign, people are also being encouraged to support pollinators in their gardens through initiatives such as planting wildflowers and creating a “Bee B&B”, a cheap but perfect home for the insects.

It comes as a wide body of research points towards a worrying decline in bees and pollinators across the UK, with one-third of Britain’s bee population disappearing over the past decade and a quarter of Europe’s bumblebees threatened with extinction. Over 97 per cent (an area the size of Wales) of all flower-rich grasslands have been lost in England since the 1930s. The South Downs has mirrored this national trend and causes include changes in land use, intensification of farming methods, habitat loss and climate change. 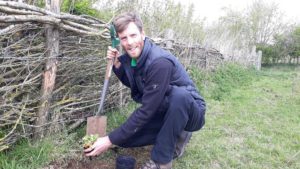 Tom Parry, Lead Ranger for the South Downs National Park, who is helping with the project, said: “Our bees are in trouble and have been for quite a while, so Bee Lines is our way of fighting back and protecting these vital pollinators.

“When you consider that bees pollinate around one-third of food crops and 90 per cent of wild plants, which in turn provides food for livestock, you can see the scale of the crisis. Our ability to feed ourselves is intrinsically linked to bees and other pollinators.

“Chalk grassland with a colourful blanket of wildflowers is the perfect habitat for pollinators and was once very extensive across the South Downs. But the past century of human impact has seen this habitat reduced to just four per cent of the total area of the National Park, creating fragmented areas that make it harder for pollinators to move through the landscape.

“Through this campaign, we plan to work with farmers and landowners to create new wildflower corridors to link up these fragmented habitats. This will allow the insects to travel along these paths. It’s a double benefit because creating this network will not only allow populations to thrive and support other wildlife, but it will also encourage pollination that will help our farmers.”

Key pollinating species in the National Park include honey bees, bumblebees, and the Adonis blue butterfly.

Tom added: “Pollinators are in trouble across the South East, but with this campaign we can hopefully sow the seeds of making the South Downs an important hub once again for pollinating species.

“We hope the entire community living inside and outside the National Park rallies round to support this worthwhile cause.”

One of the first wildflower corridors is due to be planted at East Clayton Farm, near Washington, in West Sussex.

Darren Rolfe, who is beekeeper at the farm, said: “This is a fantastic initiative to help address a very real environmental crisis and we’re excited to be doing our bit to help.”

To find out more about the Bee Lines project and donate towards the fundraising visit the Trust’s secure webpage at www.southdownstrust.org.uk/beelines/

For a step-by-step guide on how make a Bee B&B, made from a plastic bottle and hollow bamboo sticks, for your garden, visit www.southdowns.gov.uk/make-a-beehouse