Seeing the first butterfly of the season is nature’s little way of teasing us that summer is here so we can break out the sunscreen and plan for some lazy afternoons to quietly work on our tan.

Like people, every butterfly is uniquely beautiful. They are a symbol of change, rebirth, growth, endurance and life.

They are also an indicator species whose variety and volume inform us how our environment is faring. And, over the last few decades, their decline has been one of the starkest warning signs that our natural world is in crisis.

Yet concerted efforts are under way, led by the National Park Authority and partners, to create more high-quality habitat, such as chalk grassland, woodland and heathland, to support these beautiful creatures.

And there have been some real conservation success stories – such as the remarkable comeback of the Duke of Burgundy butterfly which is now thriving in small pockets.

As June sees Butterfly Education and Awareness Week, we look at five well-known, and lesser-known, butterflies you might see out on your walks in the National Park this summer. 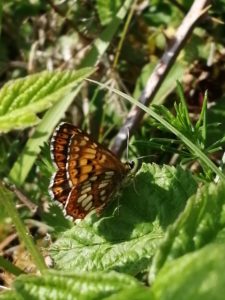 This dainty butterfly is still extremely rare but has been seen in greater numbers over the past few years thanks to conservation efforts. It frequents scrubby grassland and sunny woodland clearings, typically in very low numbers. The adults rarely visit flowers and most sightings are of the territorial males as they perch on a prominent leaf at the edge of scrub. The females are elusive and spend much of their time resting or flying low to the ground looking for suitable egg-laying sites.

Eggs are laid in small batches underneath the leaves of primrose and cowslip plants. 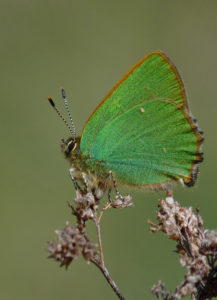 The green hairstreak holds its wings closed, except in flight, showing only the green underside with its faint white streak. Males and females look similar and are most readily told apart by their behaviour: rival males may be seen in a spiralling flight close to shrubs, while the less conspicuous females are more often encountered while laying eggs. 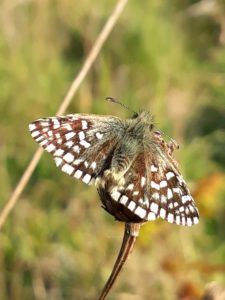 This small butterfly, typical of southern chalk downland, begins to emerge in late April to early May, having spent winter as pupae within cocoons of leaves and silk among low vegetation. Once on the wing it’s easy to miss, darting quickly between perches and nectar sources – typically common bird’s-foot-trefoil and bugle. If you are lucky enough to get a glimpse of one perched on a twig, it can be easily identified by the checkerboard pattern on its wings. 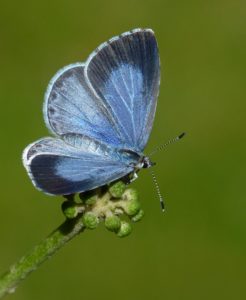 The holly blue is easily identified in early spring, as it emerges well before other blue butterflies. It tends to fly high around bushes and trees, whereas other grassland blues usually stay near ground level. It is much the commonest blue found in parks and gardens where it congregates around holly, in spring, and ivy, in late summer. 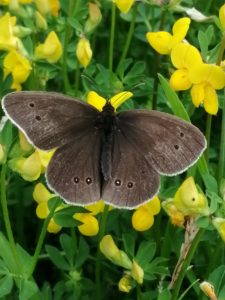 When newly emerged, the ringlet has a velvety appearance and is almost black, with a white fringe to the wings. The small circles on the underwings, which give the butterfly its name, vary in number and size and maybe enlarged and elongated or reduced to small white spots. Bramble and wild privet flowers are favourite nectar sources.

With thanks to Butterfly Conservation and photographers Charlie Hellewell and Neil Hulme.

Get involved in conservation and nature recovery!

There’s a golden opportunity this summer to help the fortunes of our butterflies and their ongoing recovery.

The Big Butterfly Count is a UK-wide survey aimed at assessing the health of our environment simply by counting the amount and type of butterflies (and some day-flying moths) we see.

This year’s survey will run from 16 July to 8 August and you can download the app on your phone to take part.