Intricate pieces of art that tell the story of the history, wildlife and people of heathlands have been unveiled and are now ready to be explored.

Inspired by stories from communities and drawing upon sources as diverse as the poet Tennyson and a 391-year-old local map, the educational trail links seven precious heathland sites in the National Park.

The Heathlands Sculpture Trail aims to encourage people to visit their local heathland and learn more about them – as well explore other heaths in the area.

The beautiful sandstone carvings tell the story of why heaths are so important – as commonland enjoyed by local people throughout the centuries and as a rich haven for biodiversity, including rare insects, birds and all 12 of Britain’s native reptiles and amphibians.

The trail, which includes a downloadable leaflet for walkers, links up heaths at Wiggonholt, Stedham Common, Lavington Plantation, Shortheath Common, Graffham Common, Black Down and Woolbeding.

The project has been spearheaded by the lottery-funded Heathlands Reunited Team, working alongside the RSPB, National Trust, Hampshire County Council and Sussex Wildlife Trust.

The tactile artwork has been inspired by information and materials gathered from site owners and managers, local communities, school workshops and volunteers conducting oral history interviews and researching archived material.

Each sculpture has a coded plaque that can be used to watch a fascinating video about each heath on people’s mobile phones.

One of the carving designs, named the “Sheeppig”, is inspired by a map of the Graffham area that was drawn in 1629, during the reign of Charles 1, showing the heath as commonland. The beautiful map, introduced to award-winning sculptor Graeme Mitcheson by a Sussex Wildlife Trust reserve manager during a tour of the area, features tiny drawings of animals appearing to be standing on top of one another. A volunteer from the project then found the original archive copy of the map in the West Sussex Records office and Graeme spent many hours creating the artwork.

Katy Sherman, Activities and Engagement Officer for Heathlands Reunited, said: “We’re very excited to have all the carvings in place and have already had some great feedback – many people wanting to pose with the artwork for photographs!

“The whole ethos behind this trail to encourage people to learn more about their local heathland and how they are all linked as one habitat. Historically these sites were more joined up and we hope this trail helps people see this incredible landscape as a whole – and why it’s worth saving! Although often just a stone’s throw from urban areas, these heaths are actually a habitat as rare as the rainforest and now cover just one per cent of the National Park. Within that one per cent, however, is some of the richest and rarest biodiversity you’ll find anywhere in Britain, with species such as the sand lizard, natterjack toad, field cricket and Dartford warbler.”

The carvings vary between 2ft and 4ft in height and the sandstone has been chosen to blend visually with other stone and sand on the heathlands:

Katy added: “Heathlands only exist today because of human intervention over thousands of years. This means that if heathlands aren’t actively managed by people – by local communities, conservation groups, the National Park Authority or others – they will be lost alongside the rare and endangered species that live there.

“We hope these beautiful carvings provide local communities with a sense of ownership and encourage people to care for them for future generations to enjoy.

“The sculpture trail is certainly inspiration for some lovely family walks this autumn and we’re sure children will enjoy the artwork!”

The walk leaflets are also available from the South Downs Centre in Midhurst.

The seven pieces of art are: 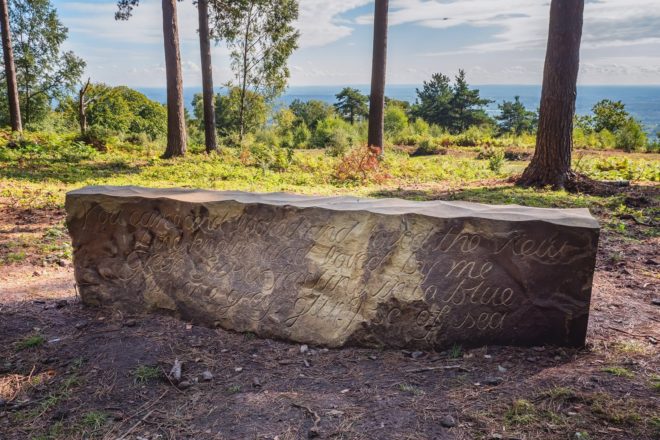 Probably the most famous admirer of the common and nearby former resident was poet Alfred Lord Tennyson. This carving is inspired by some of his words. 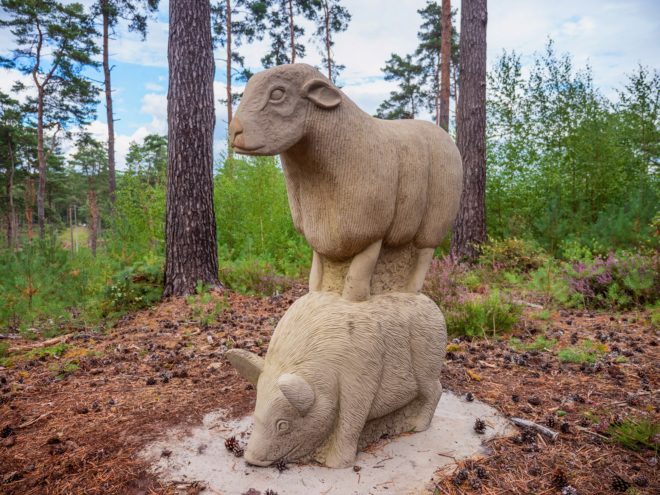 This sculpture reflects the former use of the site as grazing land but also refers to the rare map of the vicinity. The piece stands around 4ft high and is carved from sandstone. 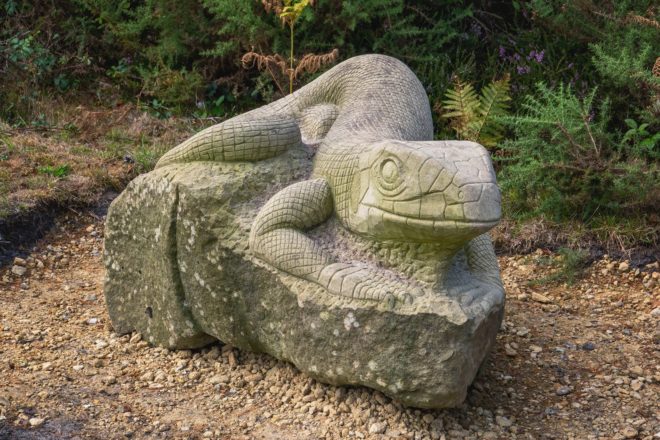 Inspired by the oral histories detailing the abundance of snake and lizard species that thrive on the common. The low-lying carving will be quite subtle in the summer months with longer grass, but will become more apparent in the winter as grass die away. The sculpture can also function as a seat for people as they end their walk. 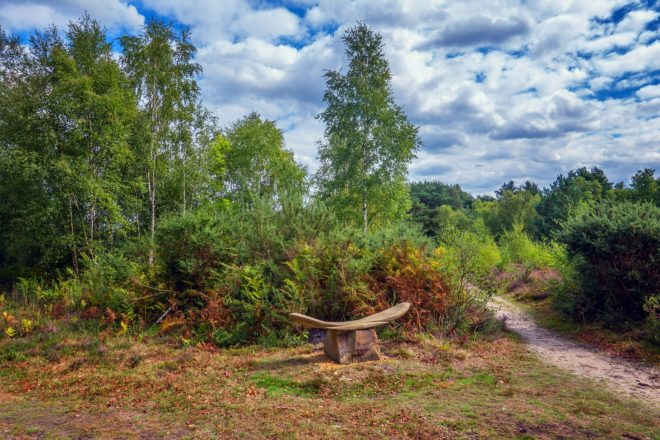 Paying homage to the importance of insects to the commons at Stedham, the design is a sculptural seat inspired by insect wings. The simple but elegant carved stone bench rises and twists at either side in a manner similar to dragonfly wings. 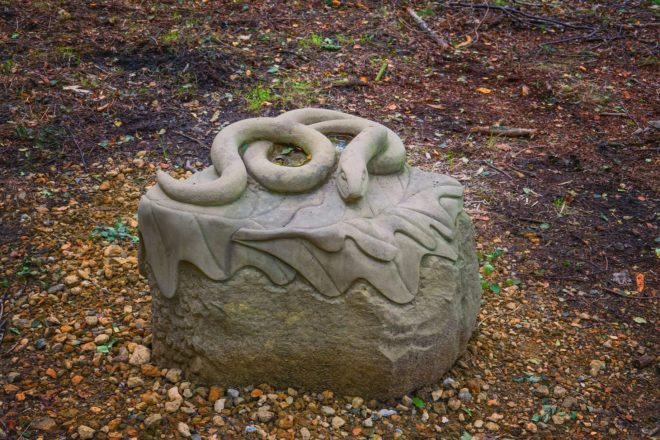 Inspired by stories of grass snakes, adders and slow worms on the heathlands, as well as the many Oak and Birch trees not found at other heathland sites. Located in a wooded area and adjacent to the Serpent Trail, the two sculptures contain a different type of snake curled up on a bed of oak or birch leaves. 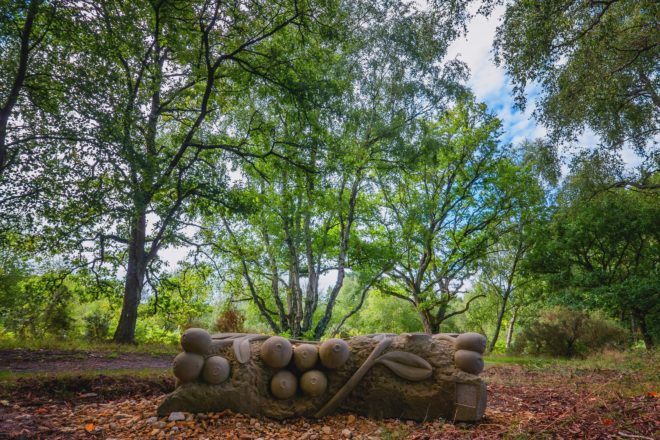 Shortheath – Cranberry on the mire

Inspired by the diverse range of flora and fauna at the common, including the thriving wild cranberry and flowering water crowfoot. This sculpture, carved out in such a way that the plants hold water, reflects the watery nature of the common, creating a subtle work that will change over time. 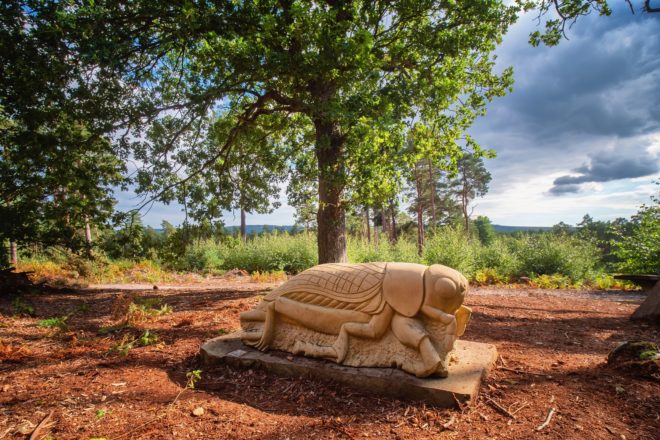 Works to reintroduce the field cricket and encourage the regeneration of heather inspired this piece. The field cricket is an extremely rare, declining and threatened insect in the UK which depends on heathland habitat. The work to help field crickets has been done as part of the Heritage Lottery funded Back from the Brink project.