The fascinating stories of seven farmers and their vital role in caring for the South Downs are part of a fun new “watch and listen” trail linked to short films about their work.

Seven “Meet the Farmer” plaques have been placed along the South Downs Way in West and East Sussex and will give people a unique insight into farming life on the South Downs. Simply holding a phone (with NFC function switched on) over the plaque, or reading the QR code, will reveal the film introducing the farmer responsible for caring for that stretch of land.

The initiative, supported by the South Downs National Park Authority, showcases the work of members of the Eastern South Downs Farmers Group, which covers over 130 square miles of the Downs between Shoreham-by-Sea and Eastbourne.The films include new stunning drone footage of the South Downs and close-up wildlife shots.

Nature doesn’t recognise farm boundaries so together the farmers are supporting endangered species such as the grey partridge and restoring priority habitats including species rich chalk grassland.

Farmer Ben Taylor, who manages the Iford Estate near Lewes, is featured in a film and speaks of on the amazing turnaround on his land, where the creation of new wildlife habitats has seen bird biodiversity flourish from just a handful of species to well over 100.

Ben, who trained as a chemist before going into farming, said: “This land has been farmed for thousands of years since Neolithic times, so farming has made the landscape.

‘We’ve achieved profitable farming in the 21st century and it’s allowed us to also provide valuable new wildlife habitats. I really enjoy seeing how farming and conservation can sit neatly side by side. We can look after the environment and, at the same time, produce food for people. 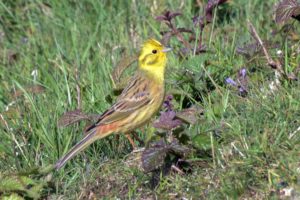 Ben also speaks of farms’ changing roles and diversification, including opening up holiday accommodation, fishing lakes and renting out offices to provide rural employment.“As you walk along the South Downs you can hear the birds singing. This is such an important migratory point for birds that are coming from the north of England or from further afield and crossing towards Europe. They come here because they have places where they can feed, places to rest and refuel. Ten years ago we didn’t have a great deal of birds, but we’ve now got 140 different species on the farm, and 35 are red-listed because they are so rare. It’s because of the environment they find that they are here.”

Ben added: “I enjoy being up on the Downs, whether it’s a sunny day or the rain is beating in your face!

“It’s just a nice place to be and do a job that you love.” 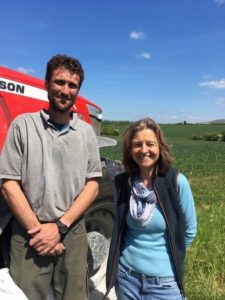 Annie Brown, of Lower Paythorne and Perching Manor Farms, near Fulking, who is lead farmer for the Eastern South Downs Farmers Group, said: “Never has there been a more important time for farmers along the South Downs to tell the visiting public about their role as custodians of our iconic landscape.  The farmers in our Cluster Group are all passionate about producing food in a good and sustainable way while making space for nature.”

Tim Bamford, Acting Regional Director, added: “They really do help make National Parks the thriving, unique places that they are.”

As well as the plaques, the films can be seen by visiting www.youtube.com/user/sdnpa/videos