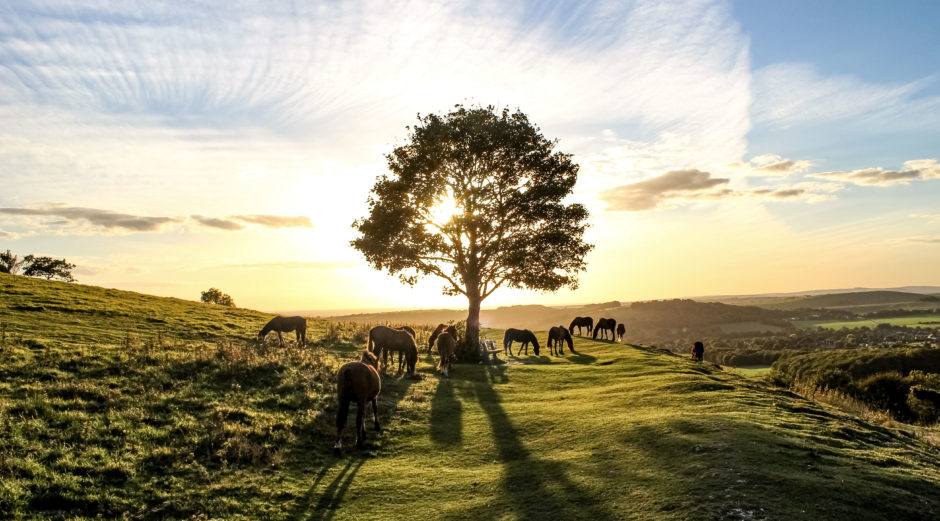 It’s a picture that’s captured the hearts and minds of thousands of people.

As ponies gathered around a tree at sunset in the South Downs National Park, budding photographer Joe James snapped away – and the result was pure magic.

Now his blissful photograph has won the People’s Choice Award in the National Park’s Annual Photography Competition. “Pony Heaven” received 2,020 unique votes – winning with just over 70 per cent of the online public poll.

Joe ventured to Cissbury Ring, near Worthing, West Sussex, to take the picture as he and his son Simon watched the sun go down.

Joe, a 38-year-old security manager from Horsham, who wins a £100 prize, said: “To win really means the world to me.

“The picture was just a bit of fun initially – I was trying out my new camera. We went up to Cissbury Ring and saw these ponies gathering around the tree. I just thought it was a perfect moment so I captured it straight away.

“As the sun went down my son and I listened to ‘What a wonderful world’ by Louis Armstrong on Spotify.”

Joe, who is a well-known local advocate for autism awareness through his own Facebook page, has been taking images for the past two years and has been honing his talent.

“I’m autistic and proud,” said the dad-of-two, who has never entered a photo competition before.

“Being autistic means I learn differently – so when I first got into photography, I looked at amazing photographs of landscape. I didn’t know what the composition was, but I was looking at what other photographers were doing. So I basically learned photography by looking at photographs.

“Being autistic also allows me to hyperfocus on photography to really hone this skill so I can get the perfect image.”

Commenting on the South Downs National Park, Joe added: “It’s that feeling of pure and utter freedom – having that breathing space around me. I can just take it all in and I’m overwhelmed by the beauty.

“Taking pictures is my version of mindfulness – I find it calms me and relaxes me.”

A total of 10 images – including competition winners and highly-commended photographs – went into the People’s Choice vote.

Nick Heasman, Countryside Policy Manager at the South Downs National Park and a judge in the competition, said: “Huge congratulations to Joe for a stunning photograph that captures the world-class beauty of the South Downs.

“It also conveys a message about the importance of these ponies and other grazers, which play a role in conservation grazing to help maintain the landscape.”

The South Downs National Park’s next photo competition will be launched in April and details will follow of how to enter.