The first of the four barn owl eggs has hatched (21 May 2019). This is four day earlier than last year.  Broken egg shell lying next to the adult in the box was the first clue. The parents are very diligent at incubating the eggs so we only have very brief glimpses of the tiny new owlet (see the image below). 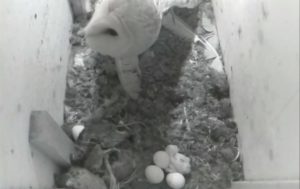 Over the next few days the other three eggs will hopefully hatch in the order they were laid. If the weather is favourable the parents will be able to build up a stock pile of their favourite food the bank or field vole.

Dry weather suits the barn owls best as they cannot easily fly in the rain. The barn owl prefers rough tussocky grassland in which to hunt and usually finds this habitat at the edges of farmland, woodland or watercourses.  The Royal Society for the Protection of Birds (RSPB) say that a pair of barn owls needs at least 20-25 km of edge to in which to hunt.  Farmland management which allows for this edge or ‘set-aside’ is therefore critical to the conservation of the barn owl.

“You may see some feathers in the box. This is the female adult moulting and usually starts when she is sitting on the eggs. Those of you with a keen eye might have noticed what appears to be a ringed bird leg in the box too! This is likely to be one of last year’s chicks. Unfortunately, it is usual for only one chick from each brood to survive after its first year.

They face many challenges. Not only the supply of food (voles, mice, shrews), which depends on good habitat and weather, but also other dangers such as pesticide usage, and being hit by vehicles on the road. Some also can drown during wet weather as their feathers aren’t waterproof.

We will know for sure which owl this was when we ring the chicks this year. We will be able to retrieve it from the box and look at the number on the ring. We cannot disturb the box now as the mother may abandon the nest.

It was also curious to see the female moving the eggs from one end of the box to the other. Although they regularly turn the eggs, it is not usual behaviour for them to be moved to a different location in the box.”

The camera in the South Downs National Park barn owl box offers a valuable tool to study the behaviour of these fascinating birds.  We will be keeping a close eye on the barn owl web cam and will update progress as it happens.