You are here: Home AboutLandscape & Geology Geology of the South Downs

Geology of the South Downs 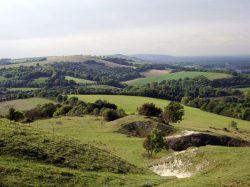 These deposits once formed a huge dome of chalk stretching across to Surrey and North Kent. Weathering and erosion during the last ice age sculpted the landscape into its valleys, distinct hilltops and ridges.

The chalk acts like a giant sponge, and stores water. This huge underground reservoir (or ‘aquifer’), feeds water from springs into streams and rivers. It also provides over 1.2 million people living in and around the National Park with fresh drinking water.

The distinctive Greensand ridge shares the same ‘scarp’ and ‘dip’ slope landform as the chalk hills. It was also formed from deposited sands and clays when this part of Britain was under the sea. The chalk layer over it however, has been worn away by weathering and time to leave the complex geology of lower and upper greensand, and gault clay. There are also areas of an iconic local chalky sandstone ‘Malmstone’, which can be seen in villages and towns across the East Hampshire and West Sussex areas of the National Park.