You are here: Home AboutLandscape & Geology Our Chalk Grassland 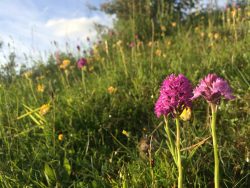 At first glance, the open hills of the South Downs seem bare: a few sheep, some hikers, maybe a figure carved into the chalk. You may be surprised that the naturalist David Bellamy has described them as Europe’s rainforests. If you want to understand why you need to get a lot closer.

These grassy downlands hold some of the rarest habitats in the UK, the result of forest clearing as far back as Neolithic and Bronze Age times. Grazed by sheep for centuries, they are home to a remarkable array of plants and creatures. Look close enough and you may find 30-40 different species in just one square metre. If you are lucky you might see one of the most beloved inhabitants of this park, the brilliantly-coloured Adonis blue butterfly. The caterpillars feed on nectar from just one plant, the horseshoe vetch, and lays its eggs under the plant’s leaves. Horseshoe vetch – like most of the other small wildflowers that brighten the grasslands – only grows here because sheep graze the longer grasses that would otherwise eclipse its struggle for nutrients and sun.

The Adonis blue also relies upon the presence of ants, which love feasting on a honey-like substance produced by the caterpillars and pupae. During these stages in the butterfly’s development, the ants will guard it constantly, even burying it in the soil overnight. Without sheep grazing the land, the grasses grow long, the sun therefore doesn’t warm the anthills, and the ants abandon them. No ants means no-one protecting the Adonis pupae from parasites and predators. Hidden natural networks like these ensure the Downs grasslands are rich in wildlife. All across chalk downland habitats are found rare plants and animals – such as round-headed rampion, lady’s tresses and early spider orchids, along with 29 species of butterfly – including the aptly named chalkhill blue.

Since World War II, the country has lost around 80 per cent of grasslands like these. In the South Downs they now cover just 4 per cent of the National Park’s area. Over one-third of the sites are less than one hectare in size. Ideally a site of at least 20 hectares is needed to secure the future of this important habitat. The smaller the ecosystem, the less resilient it becomes.

We are working with a range of local partners to protect what remains and reverse this process of decline. Each year volunteers clear invasive scrub, collect and propagate local grassland seeds. Already we are seeing the benefits, with many more rare Duke of Burgundy butterflies spotted in 2013. Thanks to our volunteers – and the sheep and the ants – the future for this important and rare habitat is looking up.