Blow away the cobwebs with a windy walk along the coast.

The National Park begins in the east at the dramatic chalk cliffs of Beachy Head with its cliff-top lighthouse. A walk from Beachy Head takes in the hugely impressive chalk cliffs along to the iconic Seven Sisters and looks inland from the UK’s highest coastal point across the gentle, rolling chalk downs and valleys.

A truly unique and surprising experience can be enjoyed at the 19th century Belle Tout Lighthouse. Full of stories of the people who have lived there and the lives they’ve saved, the lighthouse is now a completely refurbished B&B and boasts 360 degree views of the hills and the sea.

A few miles further west along the South Downs Way is Birling Gap, part of the Seven Sisters and one of the longest stretches of unspoilt coastline in the south.

All of these views can be accessed throughout the year as the drainage provided by the chalk soil and the springy turf covering the downland make walking relatively easy and safe whatever the weather. 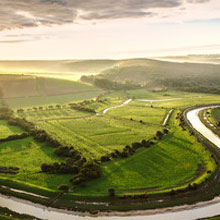